I was contacted by Gabrielle Jenks, Director of Abandon Normal Devices, in May 17′, about creating a VR experience for their biennial festival, which took place in September 17′ in Castleton, a village inside Derbyshire Peak District National Park of UK, with tons of caves! Together with Planeta, we created something crazy, unusual, and definitely push the boundaries of VR.

Inspired by the cave theme, I had an idea to transform normal people into cave dwellers. From an ordinary, clean, constraint person, to a bizarre, messy, loose wilder who acts freely! I imagine it’s the process of traversing the underground together, doing weird things together, that make the bounds between participants and shape whom they become.

So, we settled down the idea to transform participants as cave dwellers, but what weird behavior can we ask the participants to do?

Around that time, I was developing a Chewing Device for Google Cardboard for my Daily Life VR Ch. 2 Eat (see my instructables here!). Chewing Device is an analog mechanism to bring in the “chewing data” of real life, in order to reenact the chewing behavior in virtual world. Mouth apparently can do a lot of things, what if besides eating, it can also dig the ground? The image of people “chewing at the floor” together is so ridiculous that we all agree it is something worth of experiment.

Since we are bring in the chewing data, we need to use the most of the mouth / jaw movement. First of all, mouth is the only way and mean to travel down the ground, literally open & close mouth close to the floor, a.k.a. digging the ground.

We encourage participants to go wild and loose, so in experience participants can hear their voices in an echoey way. And the voice volume will generate gibberish, inspired by the 32 categorized symbols being used in Ice Age (source).

With mouth, participants can also eat stuff (meat), and puke stuff (hair ball, rock, etc). And when a participant opens mouth aiming at another participant, he/she will puke heart. And surprisingly that makes opening mouth as a major way to communicate! I’m so thrilled with this non-verbal communication, and really think it helps to shape the behaviors to be raw and primitive, and fun :)

Also, body contact is something we all love to encourage, so whenever participants touch others, random “twig” will be generated and planted on body where the contact point is.

Avatar – I used FinalIK library for creating VR avatar, and the result is quirky but at the same time very effective. The avatar looks like a possessed doll, and knowing in it is a real human being is a very strange and strong feeling. Throughout the journey, the participants will transform (both visually and mentally) from normal human to wilder, hence the shape and texture of the avatar will change every level down as well.

As for environments, it’s the part I probably spent the least time on because of the tight timeline. Luckily with Dan Brewster and Nick Dangerfield’s advice and encouragement, we settled on the heavy hand-drawn textured style.

For this project, I need to redesign the one used with Google Cardboard + web browser completely, for it to work with HTC Vive + Unity3D. I laser-cut the base and used leather for strong strap in the end. Circular pressure sensor (FSR) for the input.

I made the prototype with FSR sensor and Arduino, and Joseph Saavedra helped on perfecting the hardware design and making! It uses Teensy board in the end. The wonderful chin strap is made by Kelsey LaSeur.

This is really a pain in the butt lol

I’ve spent a lot of time on the Unity Networking system. The documentation improved a lot but it’s still quite limited in 2017. Websocket is so much clear and transparent compared to this!

According to the latest news, Unity is going to re-write all its way to do networking (2019), so I guess all my efforts won’t be able to reuse anymore hahaha (cry cry).

Still, I could share some thoughts on multi-player in VR— it’s really fun to be able to interact with other people both virtually and physically. It is still awkward to interact with strangers, but with people you know, it feels like going through a great trip together.

Suggested by AND Festival to have some elements of the scenography manufactured in material which was wearable like my project brain, we went a bit far :) Based on the cave theme and idea of participants having some sort of tribal ritual together, costume designer Kelsey designed 4 big coats and head-wears that are easy to take on and off. All 100% hand made!

To reduce infrared blocking for HTC Vive sensors as few as possible, we used mostly mesh fabric for the headwear.

For the 2018 Newcastle tour, we modified the helmet to make it stronger with more obvious face outlines. I used steal wire to make difference eye contours.

I am very lucky that Planeta, where I work at, was interested in co-producing the piece, or this would never happen in this short amount of time! We were all working hard until the last minutes, in the stone cottage near the installation site.

The project turned out to be a huge hit – thanks to the arrangement of AND Festival, we had a tent thus looked very secretive and seductive ;) Also the costume and weird behaviors with the Chewing Device, both make the experience not just interesting to try, but also entertaining to look at. 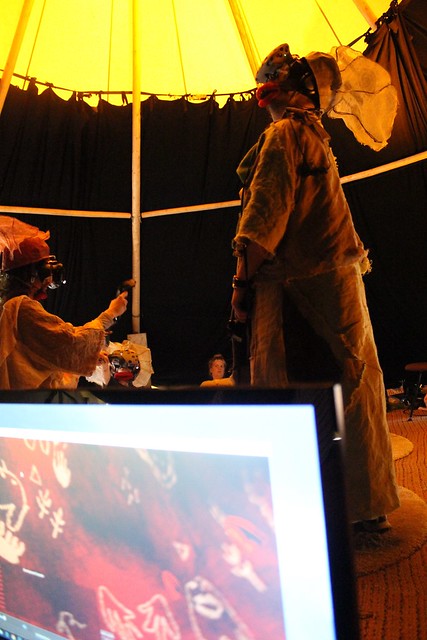 In 2018, we brought the project back to England again, this time a two day installation in The Great North Museum: Hancock in Newcastle. The participants are mostly kids this time! :D 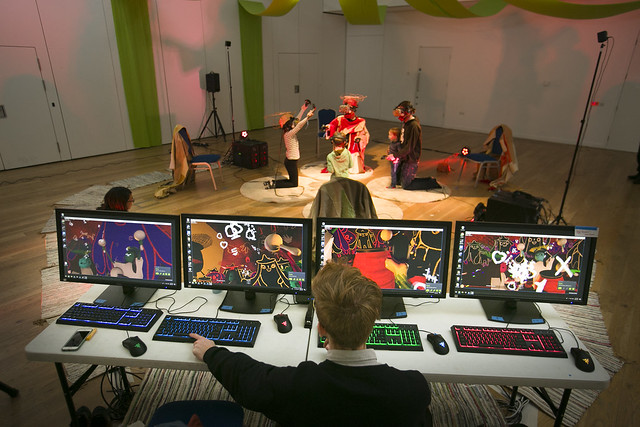